Seabourn vs Regent vs Oceania Cruises 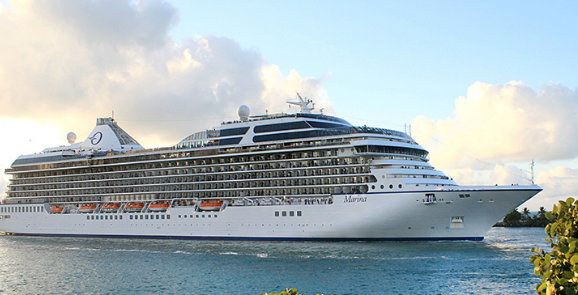 Cruise lines are classified as “luxury” if they meet certain criteria. Ships have to be all-suites, offer free wine and have in-suite Butler service. People who cruise with top luxury lines like Regent Seven Seas know that the higher cruise fares they’re paying “include” items that would be extra on other, less expensive cruises, where extras are a la carte. Want a Penthouse Suite on Oceania with Butler service? No problem. It’s about choices.

Now, Seabourn, a luxury cruise line, has just announced All-Inclusive Advantage Fares for 2013. For a limited time, and only on selected cruises fares will now also “include” roundtrip economy airfare, a one-night pre-cruise hotel stay, transfers, and shore excursions credits of up to $2000 per suite. That sounds like a lot of extras. But don’t overlook the fine print. The All-Inclusive Advantage Fare is actually an option add-on that can cost as much as $5000 over the regular cruise price!

I’d like to point out that Regent Seven Seas Cruises, for example, is well established as an all-inclusive luxury cruise line. And Oceania Cruises has always been “a la carte.”

Let’s look at some of the items Seabourn is calling “included” in its new program, and how the inclusiveness stacks up against other cruise lines.

Roundtrip Economy Air – Airfare to Europe or Australia could very well be $1000 to $2000 per person roundtrip. So the price of Seabourn’s package could definitely outweigh a huge airfare. But cruise lines buy their passengers’ air tickets in bulk, usually for a much lower fare than one can get retail. Regent, and even Oceania (which is classified as “upper premium”), include economy air. But in fact — and this is not a secret — the airfare is bundled into the cruise. They don’t raise prices to cover the “free” promotions. Don’t want to use Regent’s or Oceania’s air package? Those cruise lines will REDUCE the cruise price by the amount of the air. Your cruise price never changes.

Oh, and by the way, on Regent, if you’re booked in a penthouse suite category or higher, you get a FREE business class upgrade. And no, that will not cost extra.

Free Hotel Night – Regent always includes a free pre-cruise hotel night. Oceania has had promotions that include the same. It’s a great idea to come in a day before your cruise to acclimate to the time zone, or get a bit of sightseeing in. My wife and I always go in a day or two early! But choosing this option as part of a package limits you to the hotel that the cruise line has a contract with. What if you have points with another hotel? With Seabourn’s package, you have no choice. Remember, it’s part of the package – and you paid for it. On the other hand, with Regent and Oceania, you can remove the “included” hotel night and be rewarded with a NON-USE CREDIT (in other words, PRICE REDUCTION) in the amount of the hotel price. You will NEVER be stuck paying for something you didn’t want.

Shore Excursion Credit – Regent cruises include shore excursions, up to 50 or more during any given itinerary. An active couple on a 14-day cruise could take as many as two excursions a day each. That’s 28 shore excursions per couple. Other than a handful of excursions that incur extra costs (for example, a deep sea fishing trip or a helicopter ride) if one assigns a price of $100 per person to each excursion (which is typical for a la carte excursions on other cruise lines), you’re talking about $5,600 in shore excursions! Seabourn’s $2000 towards shore excursions credit is nice, but it’s still going to cost you. And don’t forget, you’ve already paid extra for the $2000 credit.

I appreciate that Seabourn is attempting to compete with the likes of Regent Seven Seas by claiming to be (somewhat) all-inclusive. But you’re forced to buy a package of items, which can not be separated. If you don’t use any portion of it, too bad, you have to pay for it anyway to get what you DO want. It reminds me of when I bought my last car. I didn’t really need a moon roof, but it came with a package that included floor mats and anti-lock brakes. If I wanted the mats and the brakes (which I did), I had to pay for the moon roof as well.

Now, just because I can, I’d like to throw Oceania Cruises into the mix. You have your cruise price. You have your air fare and maybe a free hotel promotion, which you can remove, thus lowering your cruise price. But, because you’re a knowledgeable consumer, you know that on Oceania alcohol is extra and shore excursions are extra. But the cruise price is much lower than the luxury cruise prices to start with. Yet with Oceania Cruises, you’re getting a very comparable upper premium (and many guests consider Oceania as luxury) cruise experience. You won’t be paying for drinks you don’t drink, and you won’t be paying for excursions you don’t take. Prices are clearly publicized; you choose what you want within your budget.

Consumers know what they want and what it’s going to cost. And if they don’t know, Key Traveler specialists are dedicated to enlightening them. We don’t merely take orders and try to sell the most expensive cruises. Our clients (80{625323b24af37c24f5a97fddb81c67dba8bd357996214eb0318c02ab7c1b66cd} repeat and referrals) know that with Key Traveler, they are getting the benefit of our vast travel experience. I won’t allow my clients to be surprised. And I certainly won’t let any client of mine think that he or she was deceived by a cruise line, or any travel supplier for that matter. My clients get what they pay for, and never pay for something they don’t want.