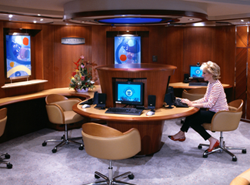 The speed, or lack of speed, of WiFi on a cruise ship has been an ongoing subject of conversation for travelers wishing to stay connected while traveling away from home.

Royal Caribbean’s cruise passengers have very little to complain about. The gorgeous, amenity-drenched ships provide experiences and services that are pretty close to perfect. But the one universal grumble – voiced by passengers across the cruise line spectrum — has to do with the excruciating slowness of onboard WiFi.

As the owner of Key Traveler, Key Cruises and Tours, as well as a father, I always need to stay connected to my office and family while traveling on a cruise ship, whether on one of Royal Caribbean’s ships or others. In this age of instant communication, being in the middle of the ocean is no excuse to be disconnected. Today’s cruisers want to have their cake and eat it too. Cruise passengers may relish getting away from the every-day stress at home, but may still want to be connected to the office or to family and friends from their cruise ship. Or they may want to get their photos on Facebook before they get home. Or they want to text a picture of the breathtaking dessert that was just placed in front of them, or drop a quick tweet about their cruise experience. But for some people, it’s just so time consuming because of the speed of the Internet on their cruise ship.

But not for long. Beginning in mid- 2013, Royal Caribbean’s Oasis of the Seas will be the first cruise ship to use a new, faster satellite network, which will surely please cruise travelers. The plan is to make sure that the new WiFi satellite works as promised, and eventually incorporate the new WiFi on other Royal Caribbean ships.

Communications satellites are stationary in space, and are something like 23,000 miles above the Earth. And the ground stations are, well, on the ground. So let’s say you’re on a Royal Caribbean ship and you send an email. Your data goes up into space, and then is relayed to the ground station, and then it goes back to the satellite in space. The several minutes (or more) the process takes on a ship, compared to the few seconds it takes back home, can seem like an eternity. And especially so if you’re on the ship waiting to receive data!

The new technology is different. Instead of one satellite, Royal Caribbean’s Oasis of the Seas WiFi will be using a linked network of eight satellites, placed much, much closer to earth. So rather than your email going into deep space and back, it’s going only a few thousand miles or so up. And when it hits the first satellite, it is immediately handed off to the next satellite, then the next, and so on until it reaches its destination. That adds up to a much faster transmission.

What’s In It for You?

Royal Caribbean will be watching closely when Oasis of the Seas goes online with the new WiFi next June. After an initial trial period, Royal Caribbean will be able to determine average usage, which will allow the cruise line to establish pricing. Because of the many applications that will be available with the new service, a menu of data plan options could be offered to passengers. Perhaps even an unlimited plan at a reasonable price. Stay tuned.

If this is a success (and we can’t imagine why it wouldn’t be), a Royal Caribbean cruise will be that much nearer to perfect for its passengers.

The potential is sky-high!