Oceania Cruises Christening of the Riviera. Photos, Events and more 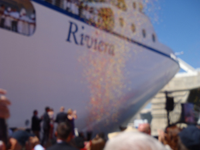 May 11, 2012 — I am one lucky Travel Professional: As members of Oceania Cruises Connoisseur Club, my partner and I were invited to the Christening voyage of Riviera. From the moment I got my first glimpse of the newest Oceania ship, I sensed the Riviera sailing was going to be an extraordinary experience.

We boarded the ship in Monte Carlo, and the boarding process was as smooth as the seas we were about to sail.After dropping our carry-on bags in our penthouse suite, which was made available earlier than usual, we moseyed up to lunch at the Terrace Café, the buffet area that rivals the offerings of most five star restaurants. This was first class food in a casual café setting. The food offerings were freshly prepared and served to us with a smile. During dinner, the Terrace Café served baby lobster tails, king crab legs opened and split, filet mignon cooked to order, a large selection of salads, deserts and veggies. Who does that? We devoured that first meal al fresco, while gazing longingly at the beautiful Mediterranean and the magnificent yachts docked in Monte Carlo, where only our ship occupied the waters overlooking the Royal Palace and Grand Casino. Our view was even better than the suites in the Hotel de Paris.

After lunch we wandered around, re-familiarizing ourselves with the almost identical layout of Marina, which we were fortunate enough to sail on twice last year. We were awed even more than the Marina, even though the ships were basically the same design. The décor of the ship is gorgeous yet understated, classy, tasteful – in a word, perfect. We felt as though we had come home, as we took in the recognizable Lalique details on the grand staircase, marveled at the dazzling chandelier which is destined to become iconic and plotted our long-awaited meals at four of the finest specialty restaurants anywhere, let alone on a cruise ship. We viewed $10 million worth of museum-quality artwork, much of it commissioned expressly for Riviera and all personally hand-picked and approved by Oceania’s CEO, Frank Del Rio. We were warmly greeted by every crew member we encountered, as if we were dear old friends. And, then, to our surprise, our butler knocked on the door to introduce himself. The surprise was Sonu was our butler on one of our sailings on the Marina last year. He was awesome last year and didn’t disappoint this time. We rested before dinner in our cabin, custom designed for Riviera with bedding more comfortable than any five-star hotel I’ve been to. At every turn we asked ourselves, who does this?

At Toscana for our first night’s dinner, we weren’t at all shocked that the taste exceeded the presentation of the dishes, which were, as expected, culinary works of art. The choices were superb and it made the decisions about our orders difficult. The sommelier carefully detailed the various wine selections; our waiter not only described the offerings but also was so articulate about the ingredients since one of our friends at our table is a vegetarian.

At 11 pm the Sail Away Celebration began as Riviera bid au revoir to Monte Carlo and set sail for Marseille. We danced, drank, partied into the wee hours and reveled in what was already promising to be a very memorable voyage.

Over the next few days, before arriving in Barcelona for the Christening, we enjoyed fascinating shore excursions led by knowledgeable and personable local tour guides. And during a sea day, we lounged at the pool in a sumptuous double-width Balinese bed and were invigorated in the new thalassotherapy pool. Who does that?!?

On the day we arrived in Barcelona, we had an opportunity to enjoy the city for the day. We spent the morning at Park Guell, with its stunning architecture – a tribute to the now-honored Antoni Gaudi, and then walked over to the Gaudi-designed church, Sagrada Familia, still under construction after 130 years. Finally, we enjoyed a leisurely stroll down Las Ramblas where many wonderful shops, cafes and vendors can be found. 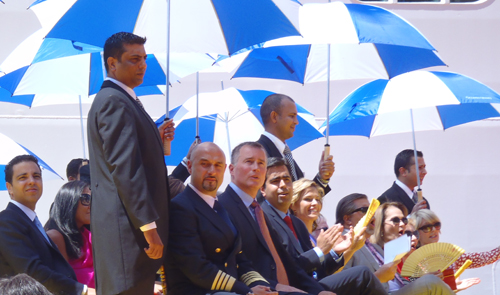 The following day was the Christening event. The energy aboard the ship was obvious, and the excitement soon escalated as we enjoyed a special brunch that was, as we’ve come to expect, over the top! After brunch we disembarked and found ourselves in an outdoor auditorium right on the pier. Even crew members were watching from the balconies to get a glimpse of the events. The day was uncomfortably warm, but I wouldn’t have missed the festivities. Oceania thinks of everything. We were each handed a beautifully colorful fan that matched the day’s motif. The butlers were on the stage hovering over the dignitaries with Oceania umbrellas to mask the sun beating down on the stage. We were greeted by the Mayor of Barcelona, entertained by flamenco dancers, acrobats and opera singers, and addressed by the well-known dignitaries of the Oceania family, Frank Del Rio, CEO, Kunal Kamlani, President and a special emotional presentation of the Oceania Commodore Award to the first Oceania general manager. The emotion in their voices as they spoke about the development of Riviera was unmistakable. And finally, the big moment arrived. Cat Cora, the famed culinary restaurateur and author, who was named Riviera’s godmother, pulled the lever to release the 15-liter bottle of champagne, and tens of thousands of pieces of confetti rained down upon us. It was a gala moment that rivaled New Year’s Eve, with everyone joining in to sing Auld Lang Syne. Really, who does that?!?

Back on board, as we sailed to our next port of call, we continued to be pampered by the first-class, attentive crew. One evening I was stopped by an assistant cabin steward who recognized me from my Marina cruise eight months ago! And the butler that serviced our penthouse suite, Sonu, not only recognized us, but correctly commented that my husband had grown a beard since we’d seen him last! Who does that? 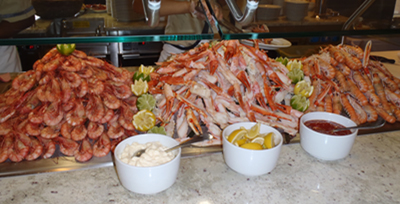 We happily savored the delectable food at every dining venue on Riviera. Red Ginger, the Polo Grill, Toscana and Jacques presented us with exceptionally fine meals. The dessert bar served up flavored gelato as decadent as that found in Italy. The poolside café featured a mouth-watering lunch menu of filet mignon and lobster medallion sliders, Kobe burgers, and fresh milkshakes. All of this at no extra charge, ever. Who does that?!?

Passengers noted the very subtle differences on the Riviera compared to Marina. However, a very notable difference is the stepped-up entertainment. We boomers had a blast during “Up in Flames,” a tribute concert to Elton John and Billy Joel. We sang along to “Beatlemania Now” and relived fond Broadway “memories” during the tribute to Andrew Lloyd Weber. My favorite though, was “Flower Power,” a fun and colorful musical revue featuring music most of us on board grew up with, and not ending until our awesome Cruise Director Leslie Jon had us all singing and dancing in the aisles.

Riviera is all that and so much more… cooking demonstrations in the world’s only Culinary Center at Sea where we observed all the “wanna-be chefs” following the lead of Oceania’s culinary instructor with glances that implied “How did she do that?” or “I can do that!” and “She makes that look so easy.” Then there are the wine tastings in La Reserve, a 24 seat, reservation-only, 7 course dinner with wine pairing, art and photography classes, tennis, miniature golf, simulated golf, a world-class fitness center, the Canyon Ranch world renown spa, a casino split into two sections and separated by the Martini Bar, trivia contests, music… and of course the premium experience that Oceania is known for: personalized and attentive service, scrumptious food, country club casual attire.