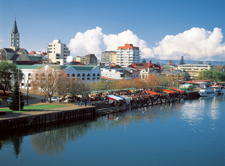 Some travelers like to choose a travel destination and spend a good amount of time there, to immerse themselves for several days or more in a particular city and, after seeing the highlights, live for a while like a local. On the other hand, some people prefer to get more destinations out of their vacation dollar by cruising. They will perhaps have time only for a few important highlights in a city, but in most cases, this can give a traveler a really good feel for what a city is all about. This is definitely the case in Buenos Aires, Argentina.

Buenos Aires is a beautiful city whose inhabitants are referred to as Porteños (people of the port). With a mixture of native culture and European influences, the city bursts with color, flavor and vibrancy. The climate is warm, the people are friendly and everyone does the tango!! That’s pretty hot.

In a city of 48 distinct barrios (districts or neighborhoods) you may think you won’t have enough time to soak in the atmosphere if you have but one day to explore. But with a good plan in mind, you can get a comprehensive picture of “the Paris of South America.”

Whether you tour Buenos Aires on your own, travel with a Buenos Aires tour specialist or you choose a cruise-sponsored “panoramic” tour, you won’t go wrong if you hit these highlights.

San Telmo – The oldest neighborhood in Buenos Aires is probably the most interesting and exciting. The streets are narrow and cobblestoned, the buildings are colonial-style, and the atmosphere is completely bohemian. On Sundays, the street fair and antiques market (Feria de Antiguedades) attract locals as well as tourists. But even if you’re not in town on Sunday, the shops, cafes, and tango parlors in Buenos Aires will be open and waiting.

La Boca – This is the neighborhood in Buenos Aries where Tango was born. You may see the tango being danced right on the street here. Stroll the Caminito (Pedestrian Street) studded with arts and crafts shops and cafes. The area is somewhat touristy, but it is busy and fun and hot, and has a lively personality.

Historic Centro (downtown) and Plaza de Mayo – This downtown business district is the closest to the important historical landmarks of Buenos Aires, for example Casa Rosada (the government building), which is open for public tours by advance ticket purchase. The nearby intersection of Florida and Lavalle Streets are bustling, pedestrian-only promenades that feature restaurants, shops, historic theaters, street performers and arcades – a great place to walk around and get a feel for the city.

Palermo – A trendy, mostly residential neighborhood of Buenos Aries is packed with first-class restaurants, bars, and boutiques. There are several “sub neighborhoods” such as Palermo-Viejo, Palermo-SoHo, Palermo-Hollywood and Recoleta, one of the most affluent areas of Buenos Aires.

Perhaps the most famous name to come out of Buenos Aires is Eva Peron, wife of Argentina’s president (from 1946-1955), social reformer, and controversial subject of a hit Broadway musical. In Palermo, be sure to visit the Recoleta Cemetery where Evita is interred, and where you can walk amongst some of the most ornate mausoleums and tombstones you will see anywhere.

In 2002, 50 years after Eva Peron’s death, a museum devoted to her life and career was inaugurated. The building is a gorgeous early 20th century mansion in the Palermo district, purchased by the Fundación de Ayuda Social Eva Perón (Eva Peron’s social assistance foundation) in 1948 as a transitional home for poor women and their children. Visitors can stroll through exhibits depicting Evita’s poor childhood, acting career, and her years as a beloved First Lady and champion of social reforms and women’s rights.

No one should leave Buenos Aires without seeing the tango danced as it was meant to be danced. There are many tango shows throughout the city, in large dedicated theaters as well as in small parlors. Almost everyone agrees, however, that to get an authentic glimpse of tango, one must visit a milonga. A milonga is both a place where a Tango dance takes place, as well as a specific type of tango dance. Think “disco.”

Milongas are held throughout the city, during the day, evening and late into the night. Tango “maps”are available throughout the city; there is sure to be a milonga where you are. Step inside and be transported. Not only are locals dancing the tango, but many will offer instruction. Group lessons are often available.

Like the tango, La Ciudad Autónoma de Buenos Aires is by turns romantic and seductive, lively and colorful. And muy caliente! That’s hot.