Are You A Celebrity? 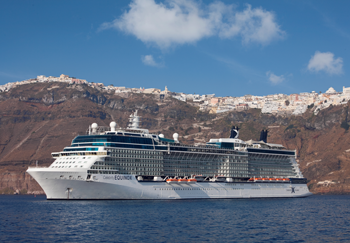 Get the Star Treatment

You don’t have to be a Hollywood or New York “Celebrity” to enjoy one of the best vacation trips in the world. Travel on a Celebrity Cruise to the Caribbean, South America, Australia and New Zealand, Asia, the Galapagos or Europe and you will be a star.

We have cruised on the Solstice Class Celebrity ships and, in our opinion, these are “as good as it gets” for the size and class. In fact, the Celebrity Solstice was so successful after its launch that Celebrity built three more, the Equinox, Eclipse, and Silhouette, and, soon to be introduced, a fourth, Reflection. More on the Reflection follows below. To go one step further, Celebrity has “Solsticized” much of the existing fleet. In other words, some of the pre-Solstice ships have been re-outfitted and updated with many of the features of the Solstice class of ships.

One highly recognized travel magazine has rated three of the Celebrity Solstice-class cruise ships among the Top Five Large Cruise Ships in the world — and that’s based on actual returning passenger opinions.

What Makes These Solstice Class Ships So Special?

Celebrity Cruise Line offers some of the best entertainment at sea. We were absolutely dazzled by the elaborate Broadway-caliber stage shows and the spectacular European cirque-style performance. Guests can also be more than observers by attending one of several theme parties onboard. Or they can be part of the entertainment if they are chosen appear in reality TV style events. Here, you can be the “star.”

A new class of suites – Aqua Class – appeals to guests who appreciate accommodations comparable to the quiet serenity of a 5-star spa, with favorite spa amenities included.

The top decks of the Solstice class ships have something truly unique. Have you ever seen an actual grass lawn on a cruise ship? A half-acre park of real grass allows for lazy afternoon picnics, fun games of bocce and cricket and rousing rounds of mini-golf. Walk over to the Lawn Grill for a country club lunch. Or laze for a while on an oversized, comfy private cabana, perfect for 2 or 4.

The exceptional Celebrity crew members, from officers to behind-the-scenes staff to guest professionals, are part of what makes a Celebrity cruise so special. We watched a “Dancing With The Stars” type show that paired passengers with professional dancers. Another day we were members of the audience at an uproarious cooking competition where Celebrity chefs and their passenger/assistants vied for top kitchen honors. Crew members conduct behind-the-scenes ship tours with humor and personality, and dive in along with guests for swimming pool games. Passengers clearly aren’t the only ones on Celebrity cruises who are having a great time. Join in and become a star.

Can You See Your Reflection?

The newest Celebrity vessel, Reflection, will be launched in November of 2012. Being a Solstice-class ship, it naturally mirrors many of the same amenities and facilities as can be found on Eclipse, Equinox, Silhouette and Solstice. But this ship is bound to be Celebrity’s crowning glory (so far!).

For one, the Reflection Suite. At 1636 sq. feet with a 194 sq. foot veranda, this is the first Celebrity suite to have two bedrooms. Only accessible by private access pass, guests can luxuriate in a seaview bathroom with a surprising glass-walled shower, enjoy complimentary refreshments served by your private butler, complimentary liquor in the mini-bar, at least one complimentary dinner for two in a specialty restaurant, top of the line bedding — you’ll sleep on an exclusive dream sleep system, a mattress you can customize — and many other exclusive perks that suite passengers expect.

An onboard art studio offers hands-on classes in jewelry making, beading, painting, cooking, even drink mixology. Speaking of drinks, Michael’s Club on Reflection presents 50 craft beers for your tasting pleasure, along with top shelf liquors in a sophisticated yet relaxed setting. How about a grill-out in the Lawn Club, a country-club eatery on the top deck lawn, where you can take your turn as head barbeque chef? Maybe, a star will be born!

Guests on Reflection will notice more seating in the restaurants, more pool-side seating, and more seats in the theater.

Outstanding restaurants on Reflection and the other Solstice-class ships include Qsine, where dinner is an artistic and culinary event, Blu, a sleekly-designed venue where traditional meals are given a light and healthful “spa treatment,” Murano, where classic French-inspired gastronomic delicacies are served, and Silk Harvest, which dishes up inspired Asian selections.

On Celebrity, the opportunities for fun and excitement, relaxation and gold-star treatment are as endless as the ocean on which Reflection will sail. Book your cruise now and become a “Celebrity Star.”